Born in Ireland, Robert had a keen interest in music from an early age and at the age of seven he began to learn his first instrument the ‘Great Highland Bagpipe’ in a local pipe band. From the beginning he showed promising signs of outstanding talent.
He is now regarded as one of the best pipers in the world and is in demand as an instructor and performer world-wide. Robert has won most of the top awards for solo and band piping including, for the 5th time in 2008, the MacCrimmon Trophy at the Lorient Inter-Celtic festival in Brittany. This unique competition shows the diversity of Robert’s musical style and ability and is a world championship event for solo piping. Robert plays a range of other instruments including the Lowland pipes, Border pipes and the Irish Uillean pipes as well as the Irish whistle.
Over the years has performed as a soloist and with other artists in Ireland and the UK, Europe, USA, Australia and New Zealand. He has performed on several recordings and many TV and Radio broadcasts 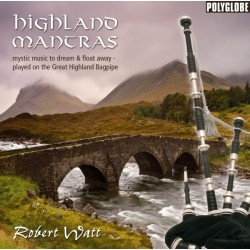